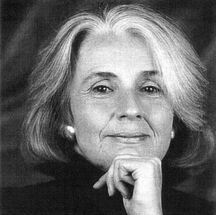 Susan Kinsolving
Sunday, September 1
6:30PM - Free
From the Poetry Foundation:
Born in Elmhurst, Illinois, poet Susan Kinsolving earned a BA at the University of California, Los Angeles, and an MFA at the California Institute of the Arts.

Kinsolving’s poetry uses dark humor, rhyme, and received form to explore loss, family, ephemera, and the natural world. In the New York Times, poet Carol Muske-Dukes praised its “powerful and practiced repertory of formal gestures, including a startling backhand of wit and irony,” observing that “[i]t is compassion, tenderness for all the beauty and dross of the world, that turns her eye away from her own reflection and toward the enumeration of odd blessings.”

Kinsolving’s collections of poetry include The White Eyelash (2003) and Dailies & Rushes (1999), which was a National Book Critics Circle Award finalist. Her librettos have been performed by the Baroque Choral Guild and the Glimmerglass Opera. Kinsolving has won the Poetry Society of America’s Lyric Poetry Award as well as several international fellowships. She has taught at the Bennington Writing Seminars, the University of Connecticut, and the California Institute of the Arts.
John Koethe & Fanny Howe
Sunday, July 14th, 2019
6:30PM - Free 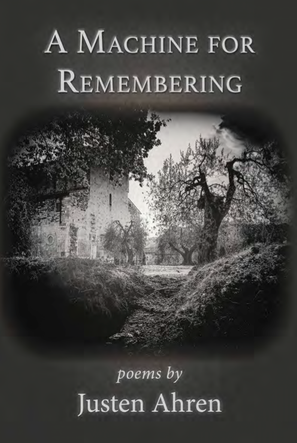 Justen Ahren
Sunday, May 19th, 2019
6:00PM - Free
A Machine For Remembering is former Martha's Vineyard Poet Laureate Justen Ahren's second collection of poetry.  Three years in the making, the book includes black and white photographs from several trips to Europe to work with refugees and document the stories of refugees living in camps and elsewhere on the continent.   This is a book of listening and witness to one of the defining human crises of our times.  ​
From the author's website:
Justen Ahren is a poet, photographer, musician and writing workshop facilitator.  He’s had two published collections of poetry, A Strange Catechism and A Machine for Remembering. His poems have been set to music by Grammy award-winning Composer Glen Roven, and Cuban composer Ileana Perez Valezquez, twice commissioned by Wendy Taucher Dance Theater Opera, and once by John Sims for his Afro Dixie Project. A Strange Catechism what made into a dramatic monologue and performed at The Yard, Chilmark and the poems and photos from A Machine for Remembering were turned into experimental theater and performed at Pathways Projects. In 2018, his poem was exhibited at Massachusetts Museum of Contemporary Arts as part of Consensus, Sally Taylor’s artist’s game of telephone.
His photographic projects have taken him all over the world. He focuses on stories retained in landscape, residual memories and witness. He’s photographed refugee routes and landing sites in Italy, and Greece, as well as landscapes along the Mexico-United States border where immigrants are crossing. His photos have appeared recently in the visual arts journals HokTok and Cold Mountain Review, and in Bitten, award-winning science writer Kris Newby’s book on the origins of Lyme Disease. He’s had one solo show at the Feldman Family Art Space.
In 2019, Ahren released his first album in 20 years (after 1996’s Remembering) The War for the Valley is a musical response to the Syrian refugee crises and the stories he heard while working with refugees in Greece.
Beyond making art out of his experiences and interests, Ahren enjoys helping other writers find their way to creative abundance. In 2007 I founded Noepe Center for Literary Arts to provide writers with time and space to write. In 2013 he started the Italy Writing Retreat in Orvieto, Italy, which he leads. Currently he is developing his Enwritenment brand, workshops and online courses which guide writers as they establish a consistent writing practice.

Ahren was West Tisbury, Massachusetts Poet Laureate from 2013-2016 and Martha's Vineyard, Massachusetts Poet Laureate from 2017-2019.
Collins was born in 1941 in New York City. He earned a BA from the College of the Holy Cross, and both an MA and PhD from the University of California-Riverside. In 1975 he co-founded the Mid-Atlantic Review with Michael Shannon. He has received fellowships from the National Endowment for the Arts, the Guggenheim Foundation, and the New York Foundation for the Arts and has taught at Columbia University, Sarah Lawrence, and Lehman College, City University of New York, where he is a Distinguished Professor. He is also Senior Distinguished Fellow of the Winter Park Institute in Florida, and a faculty member at the State University of New York - Stonybrook.

​Collins’s level of fame is almost unprecedented in the world of contemporary poetry: his readings regularly sell out, and he received a six-figure advance when he moved publishers in the late 1990s. He served two terms as the US Poet Laureate, from 2001-2003, was New York State Poet Laureate from 2004-2006, and is a regular guest on National Public Radio programs. In 2002, as U.S. Poet Laureate, Collins was asked to write a poem commemorating the first anniversary of the fall of the Twin Towers of the World Trade Center on September 11. The reading was in front of a joint session of Congress held outside of Washington D.C.

Though Collins published throughout the 1980s, it was his fourth book, Questions about Angels (1991), that propelled him into the literary spotlight. The collection was selected by poet Ed Hirsch for the 1990 National Poetry Series. A Publishers Weekly critic applauded the collection’s “strange and wonderful [images]” but believed that the poems—which are often “constricted by the novelty of a unifying metaphor”—” rarely induce an emotional reaction.” In contrast, reviews of Collins’s subsequent work regularly laud his ability to connect with readers. Discussing Picnic, Lightning (1998)and its predecessor, The Art of Drowning (1995), John Taylor noted that Collins’s skillful, smooth style and inventive subject matter “helps us feel the mystery of being alive.” Taylor added: “Rarely has anyone written poems that appear so transparent on the surface yet become so ambiguous, thought-provoking, or simply wise once the reader has peered into the depths.”

Taking off Emily Dickinson’s Clothes (2000) was the first Collins collection published outside the U.S. It selected work from his previous four books and was met with great acclaim in the U.K. Poet and critic Michael Donaghy called Collins a “rare amalgam of accessibility and intelligence,” and A.L. Kennedy described the volume as containing “great verse, moving, intelligent and darkly funny.” Sailing Alone Around the Room: New and Selected Poems(2001), the U.S. version of Collins’s selected, had a tumultuous journey to print. The story, which garnered a front-page slot in the New York Times, originally cast Collins’s first publishers, the University of Pittsburgh Press, in an unfair light, accusing them of refusing to grant rights for poems requested by Random House for inclusion in Sailing Alone Around the Room. However, it later emerged that Random House had begun to produce the book without first securing rights from Pitt Poetry Press, a highly unusual move for a major publishing house to make. Dennis Loy Johnson reported on the controversy for Salon, noting that “ultimately it was Random House, not Pitt, that chose to delay the publication of Collins’ selected volume.”  The battle between Random House and the University of Pittsburgh Press was public and uncharacteristic of the sleepy world of poetry publishing. When Sailing Alone Around the Room was finally published, in 2001, it was met with enthusiastic reviews and brisk sales.

​Collins’s next books Nine Horses: Poems (2002), The Trouble with Poetry(2005), Ballistics (2008), Horoscopes for the Dead (2011), Aimless Love (2013), and The Rain in Portugal (2016) have continued his sales streak by offering more poems that mix humor with insight. Reviewing Nine Horses for the New York Times, Mary Jo Salter commented that Collins’s “originality derives, it seems, from the marriage of a loopy, occasionally surreal imagination…to an ordinary life observed in just a few ordinary words.” She added that “one appeal of the typical Collins poem is that it’s less able to help you memorize it than to help you to remember, for a little while anyway, your own life.” But Collins’s emphasis on writing—and writing “ordinary life” at that—can, for some critics, make his poetry seem pedestrian or one-note. However, many readers find Collins a source of warmth, wit and surprisingly sure technique, and reviewers have consistently noted how Collins’s poems manifest a literal concern for their readers. John Deming in Cold Front Mag has discussed Collins’s concern for those reading his poems because “the transmission of poem to head takes place always elsewhere and in silence, in the mysterious space where poems live…Collins lets us access this place with alarming graciousness, and the openness of his voice probably helps account for his popularity.”

​Poet Richard Howard has said of Collins: “He has a remarkably American voice…that one recognizes immediately as being of the moment and yet has real validity besides, reaching very far into what verse can do.” Collins has described himself as “reader conscious”: “I have one reader in mind, someone who is in the room with me, and who I’m talking to, and I want to make sure I don’t talk too fast, or too glibly. Usually I try to create a hospitable tone at the beginning of a poem. Stepping from the title to the first lines is like stepping into a canoe. A lot of things can go wrong.” Collins further related: “I think my work has to do with a sense that we are attempting, all the time, to create a logical, rational path through the day. To the left and right there are an amazing set of distractions that we usually can’t afford to follow. But the poet is willing to stop anywhere.”
Featherstone Center for the Arts | 30 Featherstone Lane | P.O. Box 1145 | Oak Bluffs, MA, 02557 | 508-693-1850
© COPYRIGHT 2015. ALL RIGHTS RESERVED.