An evening concert presented by Pathways ARTS and Featherstone. Classical harpist Natalie Lurie, fellow with the London Philharmonia and recent graduate of the Royal Academy of Music will perform in the Francine Kelly Gallery on Wednesday August 7th at 6:30PM along with David Stanwood on piano. Program to include music by Scarlatti, Fauré, Mascagni, Glinka and more. 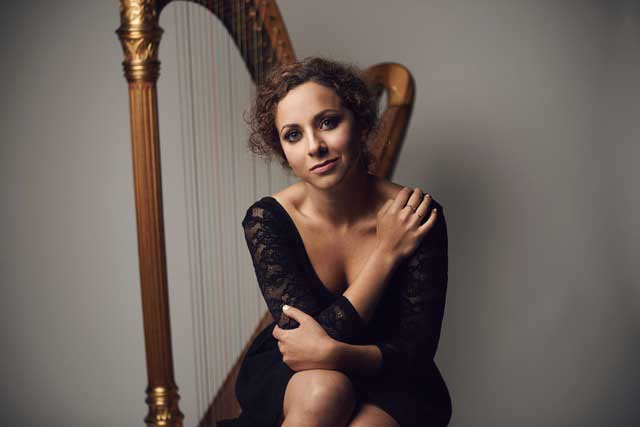 Natalie Lurie Bio:
Hailed as a harpist “who really nail[s] experimental pop music" (Paste Magazine), Natalie Lurie is a classically-trained harpist and singer-songwriter based in London. With a versatile background in different genres, she has command of the stage whether it be at Royal Festival Hall or The Bluebird in Nashville. A recent recipient of a fellowship with the London Philharmonia Orchestra, her classical freelance career in London has included engagements with ensembles such as the London Contemporary Music Festival Orchestra, the King’s College Boys Choir, and the Guernsey Symphony Orchestra. She has participated in international music festivals and masterclasses in France and was a featured performer at the 150th anniversary celebration of Lyon & Healy, the world's leading harp manufacturers.
Natalie has had a long-standing interest in expanding the harp beyond its traditional classical genre. She has studied with Jazz harpist Park Stickney, and has gained recognition for her instrumental pop arrangements on the harp. Her rendition of Adele's hit Rolling in the Deep received over a quarter of a million views on YouTube, and her collaboration of Gotye's Somebody That I Used to Know with percussionist Evan Chapman, earned the two a personal invitation from Gotye to meet him at his show in Chicago. After graduating from Indiana University, she was forced to take time off from classical music due to an arm injury, and moved to Nashville for several years where she established herself as a recording harpist and singer/songwriter. In March 2016, Natalie released her debut EP No Mercy in the Night, of which The Huffington Post called the orchestration "remarkably luscious."  Songwriting Magazine wrote "There's a real grace and effortlessness to Lurie's songwriting.” She currently performs with UK indie-rock band The Wild State and is working on a new record.
Natalie began her studies on the harp when she was seven years old and has studied with many of the world's leading harpists, notably Germaine Lorenzini, Isabelle Moretti, Skaila Kanga, Sivan Magen, and Susann McDonald. Natalie holds a BMus from Indiana University and an MA (Hons) from the Royal Academy of Music. During her studies at Indiana University, Natalie won the harp concerto competition and was awarded a scholarship through the Huttons Honor College to study a semester in Lyon, France. Natalie has a private teaching studio in London and co-founded Hampstead Harp Class, the leading center in North West London for young harpists offering harp ensemble, chamber music and performance classes.
Natalie’s family has been coming to Martha’s Vineyard since the 1960s. Her father taught sailing at the Chilmark Community Center, where she and her siblings were both campers and counselors. Her favorite thing to do on the Vineyard is sail on Quitsa Pond and watercolor in Menemsha with her Grandmother.
Featherstone Center for the Arts | 30 Featherstone Lane | P.O. Box 1145 | Oak Bluffs, MA, 02557 | 508-693-1850
© COPYRIGHT 2015. ALL RIGHTS RESERVED.