Featherstone is pleased to collaborate with the MV Film Society in managing the Feldman Family Artspace
at the MV Film Center in Vineyard Haven. A juried selection, Featherstone reviews submissions
and selects artists to display work at the Film Center, subsequently working with each artist to coordinate their shows.
Further information on the Feldman Family Artspace: MV Film Center
Details regarding submissions can be found at the bottom of this page.

This is the Year of the Woman Artist with an all women line up for the 2021 season: 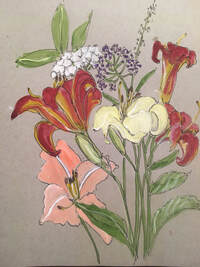 April 26 - May 23:  Marianne Neill
​(Spectrum Film Festival 5/7-5/9)
I paint for the pleasure of seeing if I can paint an image that pleases me, makes me smile.  My subjects are chosen from everyday life; a vase of garden flowers on the table where friends are gathered having coffee and chatting while painting, a corner of the living room with the favorite overstuffed chair, the deck in summer filled with plants and plastic chairs, a close-up of just the flowers we are painting. My current work is drawing in pen and then painting with watercolor on grey paper. These materials enable me to work rather quickly to capture the first impression of a still-life and the surrounding environment. I work in several sizes depending on the subject I’m painting from 5x8, to 8x10 and 9x12. I use medium weight grey toned paper.The finished work is presented in a glassed box frame, that floats the painting slightly above the background. 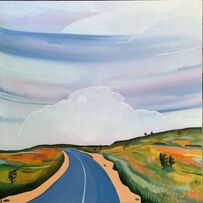 May 24 - June 20:  Lily Keller
(MV Environmental Film Festival 5/27-5/30)
Lily is a painter living on Martha’s Vineyard, a magical island in the Atlantic off the coast of New England. She works in oil and natural pigment, drawing seasonal inspiration from the Island’s natural beauty, beaches, forests, and its quintessential New England towns and cottages. She enjoys infusing the staid, salt-scrubbed New England seascape with the warmth of bright colors, beginning with a bright orange underpainting. Every painting is considered a missile of good vibes and island energy, sent with love from a New England island to your home. Lily was born in Miami, Florida, and made her way to New England to attend Bowdoin College, where she studied under renowned sculptor John Bisbee. When not painting she can generally be found on or in the water, adventuring with her three boys.

June 21 - July 18:  Frances McGuire (FILMUSIC 6/24-6/27)
"Visits to the Island fed her spirit during her time as a student at the prestigious High School of Art and Design in Manhattan, and then Queens College, where she was taught largely by working artists responding to the grit and chaos of a 1970s-early 1980s New York City. 'I never considered a career in fine art, but after college, when I worked as the assistant director of the New York City’s Art Commission, I was constantly drawing in board meetings and painting by night, which brought me a lot of positive feedback from my colleagues. Working there was the equivalent to getting a Master’s...we had everyone coming in: I.M. Pei, Philip Johnson, Robert Ryman, Wolf Kahn. Every little aspect of a project was reviewed, whether it was signage, or a park design, or a new sculpture, or even the color of a bridge.' McGuire’s oil paintings, ranging in size from 8 x 8 to 40 x 46 inches, share a strong horizontality...One feels the invisible grid beneath the surface onto which she layers color and shape and light to create feeling. Each painting is a palimpsest of emotion – but not necessarily narrative – expressed without judgment or expectation. The visual equivalent of, “I’m just saying.” The formality, or construction, of her compositions and the more traditional use of materials loosen to shards of fractured light and color for punctuation. What McGuire paints is all there is; what was is unseen, but not hidden because there’s nothing to hide." - Libby Ellis for Martha's Vineyard Magazine

July 19 - August 15:  The Gretchen V. Feldman Collection (DOC WEEK 8/2-6)
​Gretchen Feldman, a former textile conservator, was born in 1934 in Philadelphia, PA. She lived and worked on Martha’s Vineyard, MA, from 1985 until her death from lung cancer in 2008. Her work was strongly influenced by the seasonal moods of The Vineyard, as well as the changes in her garden and the landscape surrounding her studio. A lifelong fascination with the rich textures and colors of textiles, particularly quilts, can be seen in her brilliantly hued semi-abstract works on paper. These paintings, with her signature balance of shape, form and powerful color, combine layers of transparent and iridescent watercolor with thickly applied, opaque layers of crayon, colored pencil and pastel. Her work has been shown extensively in the United States including recent exhibitions at the American Visionary Art Museum (Baltimore), Carol Craven Gallery (Martha’s Vineyard), and Nevin Kelly Gallery (Washington D.C.).

August 16 - September 12:  Jeanna Shepard​ (MV International Film Festival 9/7-9/12)
​Photography was a part of my life before I knew it. As publisher of Good Houskeeping and Executive VP of Hearst Publications, my father introduced my 8 siblings and I to the magazine world. I was around advertisers, photographers and editors often. Always the one with the camera myself, I became an avid chronicler of my life around me. My first job was at Vanity Fair where I was surrounded by graphics and creative minds. During my hiatus from work to have a family, I became one of the public school photographers and publicity chair. As a result of my many weekly newspaper submissions, I was offered a photography job at one of the papers. That changed my life. Since that day in 2006, I have worked for many publications, and won many awards in the process.  I did all my learning on the job, where you have to react quickly and either be in or get in the right position. I currently shoot for all the Vineyard Gazette publications (newspaper, magazine, MVOL and the Vine), and have a portraiture and fine art photography business. I also have an ongoing portrait project entitled "Life Within the Journey" with Circle of Care for Families of Children with Cancer, where I photograph pediatric patients on their day of treatment, and travel with a gallery throughout Connecticut for childhood cancer awareness. ​

September 13 - October 11:  Annette Sandrock
​​Annette I. Sandrock, resident of Marthas’a Vineyard for over 30 years, published her first book of poetry, LABYRINTH (2019) in Portugal and is honored to be registered in the National Library of Portugal. Her book, exclusively containing her poetry and images of pruned treetops of Crete, is carried in several book stores in Portugal as well as on Martha’s Vineyard.  The images from LABYRINTH have taken on a life of their own, having been shown at island libraries and virtually by PathwaysArts of Martha’s Vineyard as “an instrument to raise awareness of the personality and special sentience of trees, our companions and providers”. Through manipulation of her photographs, Sandrock uniquely captures trees as embodying spirits and personality traits of humanity and animals.  Unfortunately, scheduled shows at the Grand Arsenal in Chania, the MV Film Center, and MVTV art space were postponed due to Covid last Spring. Her writing and poetry have appeared in several island anthologies as well as several Martha’s Vineyard publications.

October 12 - November 7:  Kate Patterson (Women in Film Festival 10/15-10/17)
Kate Patterson is a Washington, DC and Martha’s Vineyard-based photojournalist and photo editor who works with companies and individuals to tell their stories. For the last decade Kate Patterson has been working at USA Today as the lead photo editor in news, Director of Photography and Managing Editor for Visual Storytelling. As a top editor Patterson coached photo editors and photojournalists creating powerful visual stories while championing the transition to multimedia and web content. Kate is a past president of the Associated Press Photo Managers, a long-standing member of the National Press Photographer’s association a credentialed member of the Standing Committee of Press photographers and a frequent judge of the APPM monthly photo contest. Over the last decade Kate has lead the planning and implementation of the national political conventions and election coverage. She has been a member of the team coverage at the Olympics in Athens, Greece and multiple Super Bowls and a leading member of the team directing and editing war coverage in Iraq and Afghanistan. Before joining USA Today in 2000 she was the Director of Photography at the Army Times Publishing Company overseeing a staff of 5 visual journalists who covered conflict and military personnel quality of life issues. Her experience with the military created a foundation for directing USA Today’s war coverage. Patterson holds a degree from Hollins University in Roanoke, Va. and has completed various management courses including Gannett Leadership training in 2012, Poynter Institute “Leading the Visual Revolution” and FinalCut Pro training. 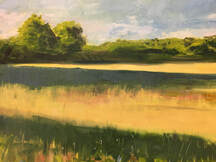 November 8 - December 5:  Julia Russell
After graduating from the University of Pennslyvania with a BA in English and then from Boston University with an MA in Creative Writing, I have been teaching English in Boston area independent schools and colleges for over 30 years, finding a long-standing position at Noble and Greenough School in Dedham, MA where I have been for the past 20 years. Moving away from my primary training and interest in writing, I began painting twelve years ago, taking classes at the Fine Arts Center in Provincetown and at the School of the Museum of Fine Arts in Boston. In addition to Vineyard shows, I have also shown and sold my work at the Zullo Gallery in Medfield, MA and at the Motherbrook Arts and Community Center Open Studios in Dedham, MA. I live in West Roxbury, MA with my supportive wife, Karen, our wonderful daughter, Ella, and our two dogs, Carter and Leroy. 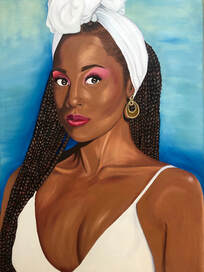 December 6 - January 2 (2022):  Shavanae Anderson
"Shavanáe Anderson's work exhibits maturity as an artist and the talent and skill of a professional, even though she has only recently dedicated herself to creating art. Born in Jamaica and raised between that Island and Martha’s Vineyard, Anderson has already accomplished a great deal for someone her age. At 16 she won the Stone Soup Leadership Institute’s Walter Cronkite Award for journalism. Upon graduation from MVRHS, Anderson went on to earn a bachelor’s degree in film studies and communications from Suffolk University, and pursued a career in broadcast journalism. During the summer months, the teenager worked on the Island for the African American Film Festival and for MVTV, an organization that she still contributes to as a freelance videographer. Anderson creates with a combination of pencils, markers, and paints to create vivid portraits that benefit from both exacting detail and a very effective, expressionist quality". - via Gwyn McAllister for the MV Times

​There are 12 show slots, plus the annual VCS/MVRHS student art contest and the Gretchen V. Feldman permanent collection. Selections were based on technical, graphic and aesthetic criteria, as well as a balance of media and styles suitable for The Film Center Art space.