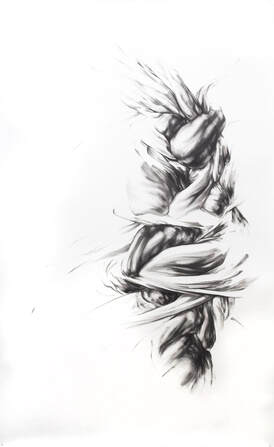 Featherstone and Boston Cyberarts are excited to present HOLLOW POINT: NANCY BAKER CAHILL.  Los Angeles artist, Nancy Baker Cahill is a visual artist whose works encompass drawing, augmented reality (AR) and virtual reality (VR.) She is the creator of 4th Wall, a free app available for Android and iOS that allows viewers to scale, rotate, move through, place and record her VR drawings-translated-into-AR drawings & hologram, and to walk or teleport through her LA studio in 360º.
Nancy says about her work, "My move to digital drawing in three dimensions is a natural extension of what began (and continues) on paper. It allows for an empathic and immersive expansion of my ideas as well as the ability to introduce traditional drawing into an uncharted technological arena. This juxtaposition of analog and digital technology in a shared space underscores the idea of tension witone body and the conflict this provokes both formally and emotionally."  Baker Cahill was born and raised in Boston and is a graduate of Brookline High School and Williams College. Solo exhibition highlights include the Pasadena Museum of California Art, her Virtual Reality (VR) public art project on the IF (Innovation Foundation) sponsored Sunset Digital Billboards, and a VR/AR event at LACE (Los Angeles Contemporary Exhibitions) in April 2018. She has been profiled by Forbes Magazine, ARTnews, Fast Company, The Smithsonian Magazine, The Art Newspaper, ZDNet, and The Los Angeles Times. She was a speaker at TEDx Pasadena, discussing AR art as a tool to create equity and access. She has recently become the subject of a Bloomberg Media series Art + Technology video. ​ 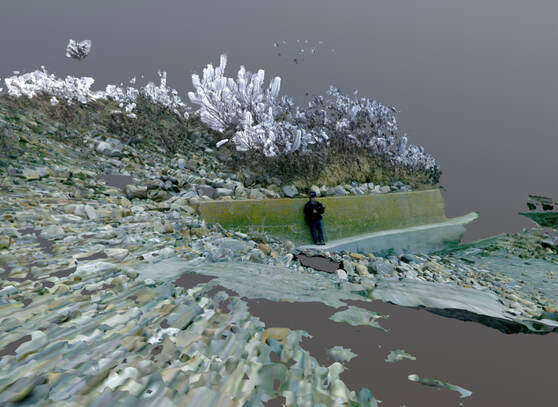 JOHN CRAIG FREEMAN is an artist with over two decades of experience using emergent technologies to produce large-scale public work at sites where the forces of globalization are impacting the lives of individuals in local communities. With his work, Freeman seeks to expand the notion of public by exploring how digital networked technology is transforming our sense of place.In the late 1980s, Freeman moved to Colorado to pursue an MFA at the University of Colorado. Before he arrived, a group of
environmentalists known as Citizens Against Billboards on Highway 93 had organized a successful boycott against a group of billboard that were lined up in a row, just outside the front gates of the Rocky Flats plant. The ads, located along one of the most scenic parts of the drive along the Front Range of the Rocky Mountains, were considered an eyesore. Plutonium contamination is, of course, invisible.
Unable to convince local businesses to advertise on the billboards, the owner was driven out of business and the billboard structures stood empty for several years. Freeman recognized the billboards potential for public art and began making proposals using early Macintosh desktop computing technology. After convincing the owner to loan the structures for the project, Greenpeace got wind of the project and offered to fund it. 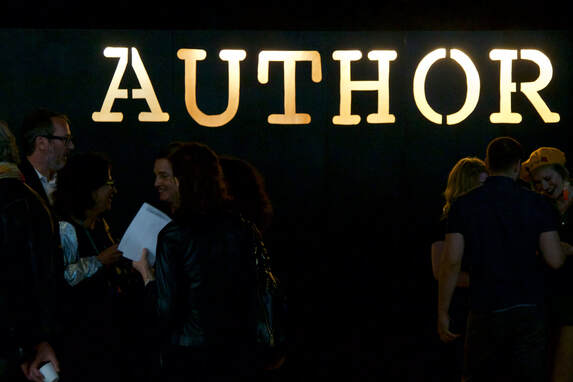 AUTHOR is a participatory video installation by the New York City interdisciplinary collaborative, a canary torsi. It is part of a trilogy of works - CAST, STAGE, AUTHOR - that draws from a collection of audio and video recordings generated with fifteen accomplished NYC performing artists speaking honestly and intimately about casting and the complexities of representation. Featherstone Center for the Arts and The Yard are partnering to bring two pieces of the trilogy to audiences at Martha's Vineyard this summer.
AUTHOR invites each visitor to the gallery to interact with the 15 performers through a text-based computer game. Forming a poetically mediated stream-of-conscious between visitors and the text and video recordings generated by the project’s 15 performers, visitors navigate their relationship to the performers' language and images. Resulting in strangely on-point, absurd  surprising exchanges, the algorithm of the game invites the author to discover their own voice inside the machine, while in "conversation" with the personal material of 15 performers.
AUTHOR originally premiered at the Invisible Dog Art Center in Brooklyn, NY in September 2017.
More information can be found at this link.
CAST is a performance by four of the 15 performers that created the trilogy. At each performance, a new, computer-generated script is culled from transcripts of the audio recordings that also make up AUTHOR. The performers receive the never-before-seen script in front of the audience and perform it for the first time in their presence. Upcoming performances of CAST at The Yard will take place July 18 and 20, 2019.

A CANARY TORSI
In 2009, choreographer Yanira Castro formed the interdisciplinary collaborative a canary torsi, an anagram of her name.
a canary torsi's work examines the moment of encounter between public bodies: performer and audience. We investigate issues at the foundation of performance: what brings us together, the nature of the space we inhabit, and how every aspect of our convergence is loaded with cultural, social, historical and personal choices that inform who we are, how we form meaning and how power is structured. The indeterminate performative systems we develop often utilize technology as a catalyst of spontaneous structures, patterns, and instructions to complicate authorship, ensure multiplicity and to impart the work with unpredictability.
Ranging from immersive dance environments to responsive video installations and online archives, a canary torsi explores the relationship between spectator and event, developing scenarios where the audience’s presence dramatically impacts the outcome of the work.

BIOGRAPHY
Yanira Castro is a Puerto Rican born, interdisciplinary artist making work in New York. Castro’s work borrows from dance, performance, theater, and visual art often utilizing interactive technology to form hybrid projects. The work takes different forms — performances, installations, online and site-based projects — developing scenarios that places the public in unique relationships to the work.
Her work has been commissioned and presented in New York City by The Chocolate Factory Theater, Abrons Arts Center, The Invisible Dog Art Center, Danspace Project and Dance Theater Workshop. Her work has toured nationally and internationally including to the Institute of Contemporary Art/Boston, City of Chicago’s Department of Cultural Affairs & Special Events, Vermont Performance Lab, The Experimental Media and Performing Arts Center (EMPAC), The Granoff Center for the Creative Arts, SPACE Gallery and the Redfern Arts Center at Keene State College. She is a 2018-20 New York Live Arts Live Feed Resident Artist, 2018 Yaddo Fellow and Marble House Project AIR, 2017 Gibney DiP Resident Artist, 2016 New York Foundation for the Arts Choreography Fellow, and a 2017-2015 participant of the Lower Manhattan Cultural Council’s Extended Life program. She received a 2009 "Bessie" award for Dark Horse/Black Forest presented by Performance Space 122 in the lobby restroom of The Gershwin Hotel. The archive for her participatory performance project, The People to Come (thepeopletocome.org), was featured in The New Museum’s exhibit, Performance Archiving Performance, in 2013. In 2018, she collaborated with choreographer Melinda Ring on a version of Simone Forti’s Dance Construction, See Saw, for the Museum of Modern Art’s exhibit, Judson Dance Theater: The Work is Never Done.
In June 2019, she premiered a new, public art work, now.here.this, for the Prague Quadrennial alongside longtime collaborator Kathy Couch. Her next evening-length work, Last Audience, a work made with the audience, will premiere in October 2019 at New York Live Arts.  acanarytorsi.org
@acanarytorsi
Featherstone Center for the Arts | 30 Featherstone Lane | P.O. Box 1145 | Oak Bluffs, MA, 02557 | 508-693-1850
© COPYRIGHT 2015. ALL RIGHTS RESERVED.